This is the great pianist, composer and Father of Gospel Music Thomas Dorsey. Image courtesy of Inspirational Christians.

Church. Sigh. While I have been known to attend service on Sundays that are not Easter or Christmas-related, no one will ever mistake me for a holy roller. It’s not that I am anti-church. I rather like the pageantry sometimes. I fully appreciate the role of the church in the Civil Rights movement.  And I regard the Black church as one of the true safe spaces for Black people and Blackness in America. Still, come Sunday morning, I’m more likely to be in my pajamas watch Disney’s Cars for the kajillionth time with my boys than darkening the doorstep of any church.

Amazingly, however, I got up yesterday morning. Got a hearty breakfast inside of my and my boys’ bodies, got all of us gussied up in fancy, yet practical garb and made it to Vine City’s Beulah Baptist Church early! I chose and continue to choose this church for my intermittent relationship with “God’s” house because of all the churches I have visited since moving to Atlanta ten-plus years ago, this one was the only one to consistently sing all of the hymns from my youth.

This is the day that the Lord has made, I will rejoice and be glad in it….

So there I was on communion Sunday, in the second pew from the pulpit singing Blessed Assurance at the top of my lungs just a clappin’ my hands and swayin’ and liftin my arms in the air and shoutin’ hallelu and most likely freakin’ out my two year old…because I obviously needed to. The year of 2019 AD was all kinds of crazy to live through and so was January 2020 for that matter —what with this impeachment madness and this datgum coronavirus. But, as Celie said in The Color Purple, I’m here.  I’m standing. I’m happy. I’m loved. And I have the strength and resources to keep on keepin’ on.

I packed plenty of tissue for church because I knew I would cry. I knew that as I sang these songs, the lyrics would resonate with me and my experience quite like never before.  I was joyful for the opportunity to sing this truth with others who also felt such a connection with the songs.  I was excited to simply be able to exclaim how happy I was about what I’d overcome and that I would be able to arm myself with that same joy in facing any other challenges that dared to come my way.

As I continued to sing, I thought of my ancestors. They waged, fought and won an existential war during slavery, Jim Crow and the Civil Rights Movement by singing songs like these. Through every cruelty inflicted up on them, through the mountaintops of highs and the rock bottom of lows, through many dangers, toils and snares, my people sang. They drew power and inspiration from singing hymns like these. They communicated and insisted on a freedom otherwise denied to them by singing songs like these.  And most importantly, they inspired both themselves and the world around them to do better, have better, see better, be better.

All of that thinking, really messed up my makeup. It also led me to discover that the person responsible for creating and popularizing the very music I was singin’ and swayin’ and cryin’ to was from Atlanta.

His name was Thomas Dorsey and he was born in 1899 in Villa Rica, Georgia to a baptist preacher and a church organist. After moving to Atlanta proper in 1908, Dorsey and his family struggled financially. He fell behind in school and got picked on, so at age 11 he turned from school and church toward  downtown Atlanta’s vaudeville scene where he developed a deep appreciation for the blues which led him to learn the piano and the organ. Proving himself a talented musician, he moved to Chicago at the age of 17 and launched a career as an agent for Paramount Records before forming a band with “Mother of Blues” Ma Rainey called the Wild Cats Jazz Band. Known as Georgia Tom, he became deeply entrenched and famous in the blues music scene, living hard and fast until he had a nervous breakdown. 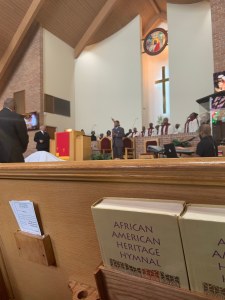 Beulah Baptist features a stained glass portrait of Black Jesus. I’m so down with that.

It took Dorsey two years to recover, during which time his momma tried to convince him to sing-sing and play for the Lord. He wasn’t trying to hear any of that and gospel didn’t pay much anyway, so he returned to Chicago and secular music until he reportedly developed an “unsteadiness.” Now, I personally believe this may have been the early onset of Alzheimer’s Disease but who knows? Dorsey was a Black man in the early 20th century so I’m sure medical science failed him in many ways. Nevertheless, Dorsey’s temporary inability to play  led him to consider suicide until his sister-in-law took him to church where the pastor is said to have removed a serpent from his throat. That moment (along with the death of a neighbor) led to Dorsey composing his first gospel blues song called “If You See My Savior, Tell Him That You Saw Me.”

As someone born in 1978, I didn’t see what the big deal was with the arrangement and the delivery of this song. But back then, the style of this new gospel song was a big, friggin’ deal. Up until that point, black gospel or negro spiritual music sounded like this. Beautiful indeed, but definitely not what Dorsey was laying down. Dorsey was onto something and he tried with all his might to spread this gospel but like all new ideas usually are, it was initally rejected by the mainstream.

Dorsey returned to secular music but he kept hope alive for this new brand of gospel and that small light was burning when in 1932, he lost his wife in childbirth and his newborn son just a few days later. This overwhelming tragedy led Dorsey to compose this:

(Google this and the song is incorrectly accredited to Jim Reeves. Reeves sang the song but he ain’t wrote it. Thomas Dorsey did. Google better recognize.)

Thomas Dorsey went on to found the first gospel publishing house by African American composers. And in organizing the first National Convention of Gospel Choirs and Choruses in 1993, he teamed up with Mahalia Jackson and  gained success in establishing his style of gospel music as tradition and the gospel we know and love in the Black church today. Dorsey was inducted into the Gospel Music Hall of Fame in 1982  in addition to receiving several other honors. He died after suffering from Alzheimer’s Disease in 1993.

And now I need some more tissue.