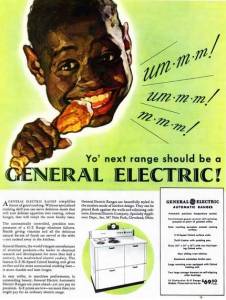 Apparently GE once thought that the best way promote their automatic range was to be full-on racist. Good job, GE. Good job.

I will never forget a particular lunch I had about 11 years ago. I was in Las Vegas working for a small PR agency and had just come from a quick late-morning meeting when I was overcome with a craving for chicken. Specifically, well-seasoned fried chicken wings. I really didn’t understand why I’d had such a craving. I mean…I enjoy the occasional fried chicken meal as much as anyone else in these United States (where there are easily 20 or more national restaurant chains exclusively selling the stuff). Still I had never desired fried chicken as much in my life as I had in that moment.

I quickly found a fried chicken wing dispensary and rushed to my office to consume it. I was fully prepared to sit at my desk and dine as I caught up on emails but then I thought better of it. As was so often the case, I was the sole Black person in my office and understood that it was my unspoken duty to represent the culture in the best possible light—an undue burden that many of us people of color bear in any predominantly White environment. I knew that consuming fried chicken in the open, and obviously enjoying that consumption, would give far too much credence to the fried-chicken loving stereotype widely purported by minstrel shows and very specifically images like these from the film Birth of a Nation.

So I took my wings back to the kitchenette area and clandestinely stole bites of it out of the view of my coworkers…until one of them caught me and inquired at the top of his lungs, “Are you eating fried chicken?”  I laughed it off and returned to my desk feeling  some kind of way. I made sure to never consume fried chicken at work ever again. I think I even went as far as refraining from eating the stuff altogether for several months after that. Unapologetic Blackness (whether that equates to chicken consumption or not) had yet to become a personal practice and it certainly wasn’t a thing within the incredibly racially-ignorant boundaries of Metro Las Vegas. A

Las Vegas is the only place I’ve ever lived where someone actually told me that they heard Black hair feels as much like hamburger meat as it looks.

Much like watermelon, fried chicken and the supposed fanatical affinity Black people have for it is very much a stereotype based on historical factors but twisted and tainted to support a negative perception of Black people. Because it is a food that is consumed with your hands and not with a knife and fork (which everyone but Kirsten Gillibrand seems to know), it is considered an “uncivilized” food and therefore associated with “subhuman” Black people who have historically been the ones who have primarily prepared it.

But let’s go way back in Black history and start with the West African relationship with the chicken. As Adrian Miller noted in his book Soul Food: The Surprising Story of an American Cuisine:

As merchants traveled along the westward trade routes, they introduced these strange, wondrous animals to potential customers. In order to close the deal, some traders talked about the chicken’s fortune-telling prowess, some boasted about the thrill of cockfighting, and others advocated that chicken was just good eating. Whatever they said, it usually worked. As chickens crossed the Island of Rhodes to get to the other side of the Mediterranean, they were an instant hit with the Arabs, Greeks, Phoenicians, and Romans by at least 500 B.C.E.  Because different cultures variably used chickens for food, entertainment and religious purposes, a patchwork of chicken beliefs coexisted throughout Eurasia. When Arab traders introduced chickens to West Africa by 1000 C.E., their debut was nothing short of sensational.

Miller goes on to explain the spiritual significance of chicken among various tribal cultures including the Ashanti and the Yoruba as well as how chicken replaced indigenous birds as the popular choice for ritual sacrifices. Still nothing in his research, or in history in general, confirms or denies that West Africans created the foundation for chicken frying. Miller instead states that the earliest discovered record of fried chicken is a British recipe from 1747. Another source, Advances in Deep Fat-Frying Foods states that Scottish people prepared chicken by cooking an unseasoned version of it in fat while West Africans battered, seasoned and cooked it in palm oil prior to the aforementioned 1747 recipe’s premier.

The point is that fried chicken existed and throughout slavery White slave owners demanded their property (who had West African heritage and knowledge of West African cooking practices) prepare it for them. Hence, the modern version of fried chicken so many of us, regardless of color, know and love today was likely and almost definitely perfected by enslaved Blacks under duress in Southern kitchens.

Blacks, though often restricted at every turn in every way imaginable, were allowed to raise chickens. And from these chickens, they were able to build income by selling both chickens and eggs. Chickens, again like watermelon, were a vehicle for financial gain and some Blacks (a tiny percentage) were even able to raise enough proceeds from their chicken farming to purchase their freedom. Did these Blacks slaughter their chickens and fry them up every chance they got? Nope. They wouldn’t dare sacrifice an income stream in that way.

What’s more, eating fried chicken in those days was not the same as hopping on down to Bojangles and ordering a mixed three piece with two fixin’s. First you had to possess a chicken, kill that chicken, pluck that chicken, clean and butcher that chicken, soak that chicken in brine, then butter, season, batter and fry that chicken for a good 20 minutes.  There wasn’t anything quick or convenient about it. Fried chicken consumption in Black households was therefore reserved primarily for special occasions, typically on a Sunday when time and circumstance permitted them to live like humans with their own personal chores and responsibilities and hobbies and leisure activities and so on. And with the proliferation of religion among Blacks, fried chicken became something kind of special as this Arkrepublic.com article points out:

For southern Blacks, eating fried chicken was also an activity integrated with the institutionalization of the church. Coined “The Gospel Bird” since the 1930’s, the foul was held to a divine status like in West Africa, and was prepared on Sundays for the arrival of the pastor. Besides the arrival of the pastor, what made this occasion special was the fact that it brought people closer together.

Following Emancipation and on into the Reconstruction era, many of us sold fried chicken as a living usually out of street vending operations in the north or chicken shack outfits in the south, and most often because other employment opportunities were simply not available for us. Those who purchased the “finger-licking goodness” weren’t exclusively Black; everybody bought and ate fried chicken the same way everybody still does today.

So are we crazy, ravenous fiends over fried chicken? Naw. Though old advertising, Jim Crow culture and certain modern commercials (thank you Mary J. Blige and Popeye’s) suggest otherwise,  many of us prefer other meats like beef or seafood.  Many of us can’t stand to eat anything with a bone in it. And many of us are vegetarian and vegan.