This particular Black History Month Cultural Phenomena question has been broken up into two posts, the first of which you’ll find here.

PART II: BUT THEN AGAIN, YES IT IS A THING 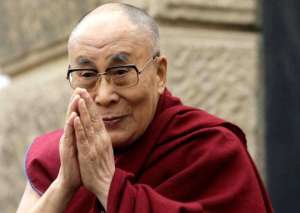 The Dalai Lama was a pretty cool and chill guy. Image courtesy of Reuters.

Admittedly, I’ve had some rather unique life experiences. For example, I have been a contestant on the Price Is Right. I have been snuggled by a dairy cow while standing in the middle of a pasture. And once, I had breakfast with the His Holiness the Dalai Lama.

I think the breakfast lasted for about 1-2 hours tops and I don’t even remember actually eating anything. What stands out most in my mind are the responses the Dalai Lama gave to the four people who asked the following questions:

“How can I quickly master the process of attaining enlightenment?”

“Is there like a 5- or 10-step method to achieving enlightenment?”

“Is there any way that I can reach enlightenment in the next couple of years?”

“Are there any shortcuts to being enlightened?”

As you can see, this is the same question said in four different ways. Still the Dalai Lama was incredibly patient and gracious.

First he explained how enlightenment was a lifelong process that offered a different journey for everyone depending on the individual. Then he said that the path to enlightenment does not have a prescribed set of rules or steps. Then he again reiterated that enlightenment is a natural development that is not mandated by timestables and measures. And then he simply busted out laughing and said something to the following effect:

You Americans have been spoiled by the luxuries of this country. You think everything is supposed to work like a drive through. Drive up, place your order, pay your money, get your food. And look what kind of food you get. It is neither healing nor nourishing. It’s just a quick fix. Eating a good meal, a fulfilling meal, a healthy meal takes time. You must grow and pick the fruit and vegetables. For bread, you must grow and harvest the wheat. If you eat meat, you must raise and slaughter the animal. Then you bring these ingredients into your home and clean them. You build a fire to cook with. You gather together your herbs and spices for flavoring. You follow a recipe to achieve your desired dish. Then you prepare your table with dishware and cutlery and you serve the meal, and then you eat it. And even while you’re eating, you take time to taste and drink and enjoy. The same goes with enlightenment, there is nothing fast or quick or instant about it.

He sat for a moment and regarded the crowd, allowing his words to sink in. And then a young woman raised her hand and asked:

“How can I become enlightened faster?”

In America, time behaves and is regarded differently than much of the rest of the world as per ExactlyWhatIsTime.com:

The United States is one of the fastest paced countries in the world, perhaps partly due to the fact that many Americans are always looking to the future, striving for the “American Dream”. It is a culture that values busy-ness, which equates a hectic and frenzied life-style with success, status and importance.

This incredibly enlightening site goes on to explain three different cultural perspectives of time and its uses as follows:

I am actually quite cool with this idea of “Colored People Time” because while I do enjoy being early and punctual, I definitely value my family, the rhythm of nature and those practices and experiences that enrich my spirit much more than I value the concept of time. This view has nothing to do with laziness, or a lack of discipline, or stupidity, or ineptitude.

Case in point, today is picture day at my kids’ school. After waking them and dressing them and shining their faces with Vaseline and shea butter, I loaded my toddler boys into the car with marshmallows, apple slices, and valentines for their individual Valentine’s Day celebrations. I was about five minutes behind my usual departure time because of the extra prep and got caught at a notoriously long stoplight on the way. My stop there was extended another three minutes because of a fire truck passing through on its way to some emergency.

Admittedly, I began to panic. What if the emergency truck was headed to an accident that specifically blocked my way to school? What if I didn’t make it in time for the boys to have their morning snack? What if this lull in my progress had an adverse effect on all the other things I had scheduled for both the children’s and my day? Just as I was in the perfect mood to start cursing the streetlights, the car in front of me and all of humanity, my three year old let out a loud and excited, “Mommy looooooooooookkkk!!!!”

I turned to investigate and beheld a full size excavator scooping up a large mound of earth and then swiveling to dump it on a little mini mountain.  I hadn’t even heard or noticed the thing but both my toddler sons, who are currently infatuated with all things construction truck, were transfixed by this real-life, up-close demonstration. They were having the time of their lives watching and I was absolutely thrilled at how absolutely thrilled they were.

In that moment, I was thankful for the extra five minutes and the prolonged light and the fire truck because I never would have been able to organically create this same situation or experience for my boys—this experience that will undoubtedly have a lasting impact on their lives. The light changed and we turned the corner smiling and chattering with glee about what we had just seen together and none of the things I’d worried about mattered or ended up mattering by the time I got them settled into their classes. I had made up my mind to go with the flow and I had not lost anything; I’d only gained.

If this is what it means to be polychronic or live on Colored People Time, I’m good.