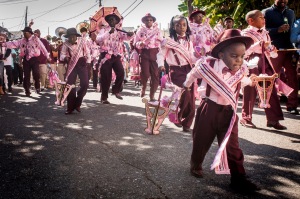 This image of a Second Line parade is courtesy of the Second Line Education Blog, a New Orleans blog that follows the voices of Black people in education. You can check them out at http://www.SecondLineBlog.org.

Though I was born and raised in Northern California, I will always love New Orleans. The Crescent City is the place where I discovered my womanhood, made lifelong friends, and first realized that my Blackness is up to me to define. It’s also where I was introduced to Second Lining. To date, I have Second Lined at a wedding and at many Mardi Gras affairs. I also found myself caught in traffic blocked by a Mardi Gras Indian-spurred Second Line in the middle of N. Galvez Street. The traffic incident (and the several hours spent in it) kind of sucked but all the other experiences make me want a Second Line parade at my funeral. Honestly, I thought it was just a Big Easy thing,  but Second Lining is so much deeper.

Second lines trace their roots back to the 19th century and the fraternal societies and neighborhood organizations that collectively provided insurance and burial services to members, especially among the African American community. One of the earliest such organizations was the New Orleans Freedmen’s Aid Association, founded in 1865 at the end of the Civil War to provide loans and education to newly freed slaves. These organizations began hosting parades as neighborhood celebrations, to advertise their services and to honor members who had died.

As racial segregation slowly dissolved and insurance and other services became available to black New Orleanians from mainstream providers, the social aid aspect of these organizations diminished. The groups themselves persisted, along with their parades, and today new organizations continue to form with the primary purpose of holding a parade. Reflecting their benevolent roots, however, these organizations are generally still called social aid and pleasure clubs. They have names like the Jolly Bunch, the Sidewalk Steppers, the Money Wasters, the Lady Rollers, the Perfect Gentlemen, the Devastating Men and the Popular Ladies.

Still, the origins of the Second Line actually go back much farther as they are rooted in centuries old West African traditions. Louisiana and New Orleans, in particular, maintained the purity of the West African practice because of the region’s unique experience in the Transatlantic slave trade. As per LouisianaFolkLife.org, when the French initially colonized the territory that would eventually become 14 U.S. states including Louisiana, they specifically brought African people from the Senegambian region beginning in 1719. Because the Senegal Valley was very much like the Mississippi Valley, the French were interested in exploiting these Africans’ knowledge of rice cultivation.

These enslaved people came directly to the Louisiana region from Africa instead of being filtered and traded through other ports of entry—and therefore brought with them and retained many traits of their original culture. One of these cultural traits was the processional dance. As they lived, worked and picked up influences from their environment, they added and adapted details of their dance traditions while remaining true to the spirit of the dance. Check out these examples of traditional Gambian dances at this video here, this other video here, and another here. Then compare them to this recent Dumaine Gang Second Line and this Mardi Gras Indian dance.  Can you see the connection? Better yet, can you feel it?

So the next time you happen to Second Line—or eat a bowl or gumbo or jambalaya for that matter—know that you’re experiencing a Senegambian, and therefore African, tradition. And that’s what’s up.