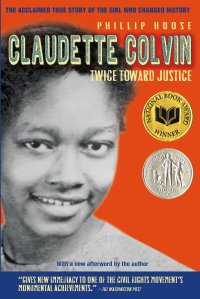 Claudette Colvin (1939-) was a mere 15 years old when in 1955 she refused to give up her seat on a bus for a white passenger. She defied Montgomery, Alabama’s segregation laws nine months before Rosa Parks and rightfully should have been the face of the Civil Rights Movement.

Like many of the heroes I will mention during this Black History Month, I’d never heard of Claudette Colvin. However, her absence from history books was less due to historical whitewashing than to Civil Rights leaders’ preoccupation with conveying a certain “image.”

Ms. Colvin came from humble beginnings in one of Montgomery’s slums, but she was a high-achieving student and dreamed of one day becoming president. On that fateful bus ride in March of 1955, she cited the Constitution as justification for failing to relinquish her seat  and had been inspired by Sojourner Truth and Harriet Tubman to stand firm in her decision to remain seated.

Back then, as a teenager, I kept thinking, Why don’t the adults around here just say something? Say it so they know we don’t accept segregation? I knew then and I know now that, when it comes to justice, there is no easy way to get it. You can’t sugarcoat it. You have to take a stand and say, ‘This is not right.’ And I did. – Claudette Colvin

As she had violated the law, she was arrested and made headlines in the local newspaper which caught the attention of Dr. Martin Luther King Jr. and NAACP. Initially, they were eager to use her case to challenge segregation laws, but turned it down because they felt she wouldn’t make a good candidate. She was young, dark-skinned, “feisty” and had become pregnant by a married man. Movement leaders felt that the right candidate had to have a certain look and be otherwise infallible in the eyes of the media and the American public.

Ms. Colvin later on became one of four plaintiffs in the case of Browder v. Gayle which ended in the decision that found Montgomery’s’ segregated bus system unconstitutional. Following the case’s outcome, she relocated to New York City where she became a health professional. She is still alive and well today.