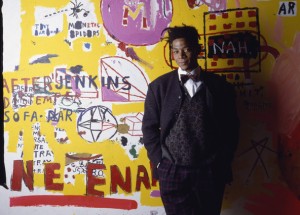 I’m proud to kick off this 2016  Black History Month’s celebration of Black visual artists with the late, great Jean-Michel Basquiat. Though often referenced in hip-hop, admittedly I didn’t know much about the artist until I chose to write about him in an art history class in grad school. I immediately fell in love with his character and his approach to art.

One of the most famous figures of the post-modern art movement, Basquiat is remembered as a wild-child graffiti artist who became a neo-expressionist 1980s art superstar. His work, easily recognizable for his signature three-pointed crowns, copyright sign, black lettering and anatomical figures, is often described as primal, cryptic, stream-of-consciousness collages. But I found this kind of synopsis unfair, inaccurate and pretty damn microaggressive. (The same kind of critics who offered these summaries called Basquiat “art pickanninny” and “Sambo.”)

The son of Puerto Rican and Haitian immigrants, Basquiat, like any other African-American, was acutely aware of his social status and its implications. He sought fame and fortune as a way to make sense out of his own existence and as a means of social acceptance with his peers and the world at large. Though he achieved global stardom by producing hundreds of paintings and drawings during his brief life, neither his fame nor his fortune made a significant impact on the way he was perceived personally and professionally. Through his work, Basquiat revealed a sadly familiar complex and contradictory personal narrative of the American Black experience.

Countless Basquiat pieces tell this story as does one of my favorites. In Untitled (Sugar Ray Robinson), 1982, it’s easy to recognize the name of the boxing great. Basquiat’s pervasive crown signifies a reverence for the athlete as it sits atop what must be the athlete’s smiling (or grimacing) face. At closer inspection, a faint box is drawn around “Ray.” Black paint is layered over the boxer’s form and other details are crossed out. This is not simply a portrait praising one of Basquiat’s heroes. Rather, it speaks to those few viewers who are willing to look beneath the surface of the black veneer.

Sugar Ray Robinson might have been known as a great African-American fighter but he never actually liked boxing. He only fought because it was the quickest way to escape poverty. Robinson viewed the sport as a brutal, ugly business – for him, a business that led to premature senility. In 1965, Robinson officially retired from boxing. In 1982 the boxer was poor and surviving off of a stipend provided to him by Frank Sinatra. Basquiat seemed to ask viewers exactly what they knew about Robinson other than the fact that he was black and a boxer. The artist requests that viewers shine a “ray” of light on the real story behind the man.

You can learn more about Jean-Michel Basquiat and his work here.